Hot stories of the day

Amazon announced a ban on its facial recognition software called “Rekognition“ to police. The ban comes after growing concern over false positives and privacy concerns. Amazon employees pushed the company to scale back efforts after documented racial bias and imperfections in the software could exacerbate police violence against minorities 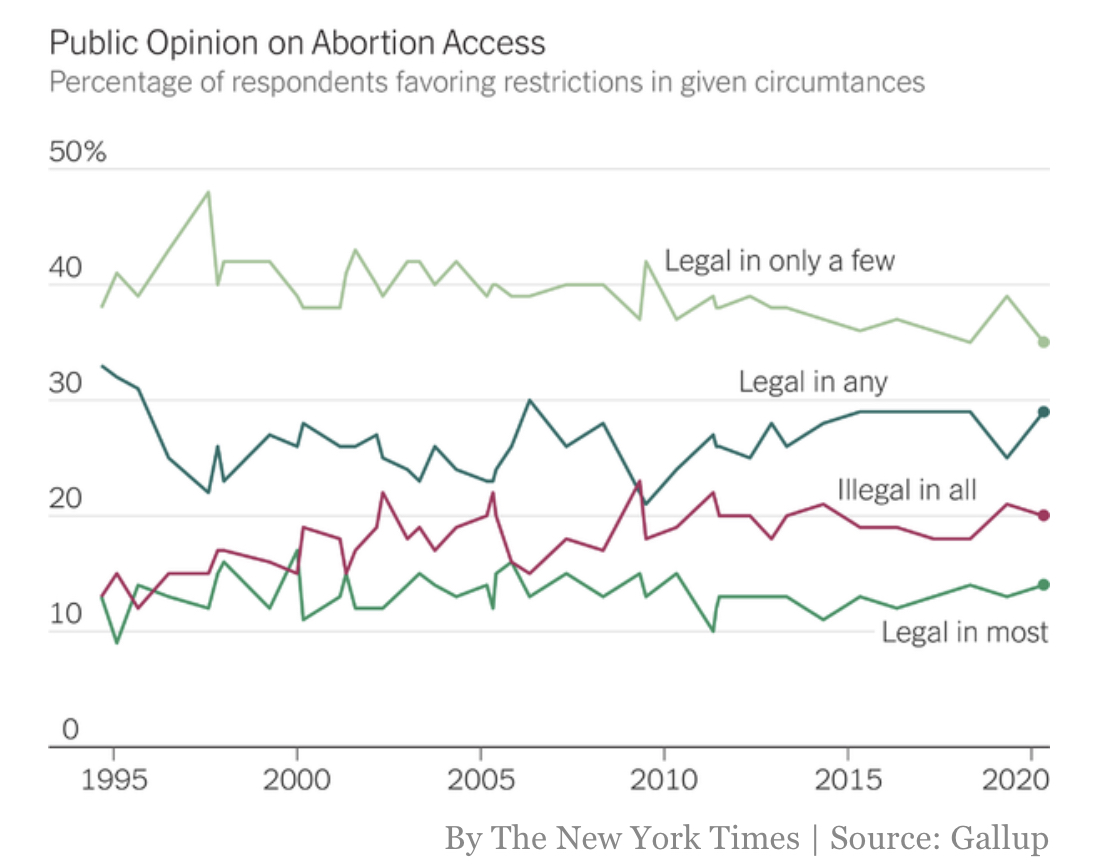 The U.S. Supreme Court has agreed on Monday to hear a case that could have longterm impact on women’s right’s to have an abortion across the 50 states. Most americans today agree that women should not be barred from having the option. Most people also favor having some restrictions on abortion.

Parler, the right wing social media app, has returned to the Apple App store after being banned. The app was initially removed because Parler due to “inadequate moderation policies” per Apple’s terms of services. Shortly after, they were subsequently removed from Amazon Web Services virtually booting them from the internet altoger.

A 100 year old invention from Nikola Tesla has resurfaced as a potential solution to modern problems. The Tesla valve is a one way valve that uses no moving pieces. The design allows for a fluid to easily pass through in one direction but almost impossible in the other direction.

The U.S. Intelligence chief announced in the Annual Threat Assessment of the US Intel. Community that China’s upcoming space station poses a national security threat. The station is intended to “gain the military, economic, and prestige benefits that Washington has accrued from space leadership,”

Columbia engineers have developed the smallest single chip system ever. This chip is a “Chip as system” that is the chip alone and nothing else such as casings or other components.Being so small, one couldn’t see it with the human eye.

The conflict between Israel and Palestine is escalating to a near war-like scenario. The Israeli police force has been clashing with Palestinian protesters for weeks. The protests started in response to potential evictions of Palestinian families in the East Jerusalem neighborhood of Sheikh Jarrah. Israel launched missiles to Palestine early Tuesday.

Pfizer-BioNTech has received F.D.A. approval for children under 12-15 years of age in the U.S. on Monday. This isn’t the last step as an advisory committee of the Centers for Disease Control and Prevention is expected to meet shortly to review the data and make recommendations for usage in that age group.

Congressional Republicans are expected to oust Rep. Liz Cheney as the third highest ranking member in the House of Representatives. This is mainly due to her non-willingness to perpetrate the Big Lie that Donald J. Trump won the 2020 Election.

The U.S. was hit with a ransomware attack earlier in the week. The company Colonial Pipeline was hit with the attack, disrupting half of the jet fuel and gas to the east coast. The Department of Energy is leading the investigation into the incident, with help from the DOD, CIA, and FBI.

Self proclaimed “Dogefather” Elon Musk hosted Saturday Night Live over the weekend. His episode was the third most watched behind Dave Chapelle, and Chris Rock. Elon hyped the crypto currency Dogecoin leading up to the event, pushing the price up. The coin dropped over 30% as soon as he started his monologue.

The April jobs report stunned the market by falling well short of expectations. The data showed 266,000 new jobs created, which was about a quarter of what was expected. Many employers are struggling to find employees, as the pandemic has shifted the workforce.

A Chinese rocket booster is expected to fall to earth uncontrollably on Saturday. The massive rocket body measures 98 feet long and 16.5 feet wide and weighs 21 metric tons, according to the Aerospace Corporation, a nonprofit that performs technical analyses and assessments for a variety of government, civil and commercial customers.

A team of researchers claim in a new paper to have evidence of “fungus-like Martian specimens”. They believe they have found photographic evidence of a variety of fungus-like organisms, some resembling the shape of puffballs, a round cloud-like fungus found in abundance back here on Earth, on the Red Planet.

Facebook has blocked an add campaign by the company Signal. The campaign was intended to alert users to the types, and sheer volume of data held by Facebook and it’s subsidiaries. The adds were to be personalized to each user using this data. Signal didn’t break any of Facebook’s rules but the public embarrassment seemed to be a bit too much for them to handle.

The Department of Defense Office of the Inspector General has announced the launch of a formal evaluation into The Pentagon’s actions regarding “Unidentified Aerial Phenomena” or UAP. This comes as the long awaited UAP Task Force brief to be sent to the Senate.

Pandora says it will no longer sell mined Diamonds and will switch to all Lab grown diamonds. CEO Alexander Lacik says the change was part of a broader sustainability drive headed by the company. Diamond mines are often located in poor countries consisting of difficult manual labor.

Ex-President Donald J. Trump has returned to the world’s stage with the unveiling of his new “social media platform”. The Blog is styled like twitter hosted as a running blog of twitter-length commentary from Trump. Titled “From the Desk of Donald J. Trump”, we expect this to be just the beginning.

Facebook and Instagram are threatening that users will need to pay for their services. But only if users don’t allow the pair to track them from app to app after installing iOS 14.5. IOS 14.5 has a feature that prompts users to “allow” or “ask not to track” whenever apps try to use their personal info.

A briefing on suspected energy attacks on US intelligence officers turned contentious last week, as senators demanded more information about the mysterious incidents from the CIA and accountability for how the agency has handled them.

On Sunday Portugal finished the Arouca Bridge which is now the worlds longest suspension bridge at about 1,700 feet or almost 5 football fields. You can only walk across, and you’d need to be accompanied by a guide

The California governor Gavin Newsom will face a recall election

President Biden announced that the refugee cap will be lifted to 62,500

The NYPD started patrolling the streets with their 4 legged Boston Dynamics Robot named Digidog in December. Last week mayor Bill DeBlasio returned the robot to Boston Dynamics. The police signed a $94,200 contract for the robot, one $74,500 spot unit and one 360-degree “Spot Cam” camera for $21,800.

North Korea responds to Biden’s address to congress last wednesday where Biden called the nuclear programs of Iran and North Korea a “serious threat to America’s security and world security” and promised to respond through “diplomacy and stern deterrence.”

Bill and Melinda Gates announce that they will split after 27 years of Marriage. A statement released from the Gates foundation reads: “After a great deal of thought and a lot of work on our relationship, we have made the decision to end our marriage,”

Cryptocurrency Ethereum hits $3,000, marking a quadruple in value in 2021

2 incidents are being investigated by the pentagon and other agencies including one near the White House that could be possible directed energy attacks. The varying set of complaints includes ear popping, vertigo, pounding headaches and nausea, sometimes accompanied by a “piercing directional noise.”

Nasa ran a hypothetical impact scenario has been run all through this week to the April 26th. They highlighted possible impact effects, ranging from an in-air explosion that causes no damage to a mass extinction event.

Labor Secretary Walsh made waves Friday morning with comments on gig workers when asked about drivers working for delivery apps such as Uber, Postmates, and Doordash. As many as 55 million people in the United States or 34% of the workforce, were gig workers in 2017, and the total was projected to rise to 43% in 2020.

Elon Musk is set to host SNL with expected skits about Dogecoin, and Space travel

President Joe Biden addresses congress marking the 100’th day into his administration. Flanked from behind by Vice President Kamala Harris on his right, and Speaker of the House Nancy Pelosi on his left. He used the opportunity to list his accomplishment and goals.

Organizers allege Amazon’s agents unlawfully threatened employees with closure of the Bessemer, Alabama warehouse if they joined the union and that the company emailed a warning it would lay off 75% of the proposed bargaining unit because of the union.

The U.S. Census Bureau delivered the 2020 Apportionment Results to the President. The population grew by 7.4% overall which is the slowest rate in decades. The current tally lands us at 331,449,281 residence. The electoral, and congressional apportionments favored republican voting blocks.

On Wednesday evening, a North Carolina Judge denied the public release of police body-worn camera footage in the public “execution” of Andrew Brown Jr. at the hands of N.C. police

Federal Investigators execute search warrants on Rudy Giuliani’s apartment and office as part of an investigation into wether he broke lobbying laws as the Ex-president’s lawyer.

Japan Holding back on the electric future

Scientists have discovered that flatworms can see color without eyes

Today, astroid 99942 Apophis will pass through the zone of High-Altitude satellites

Amazon faces off with Union seeking employees in Alabama

SolarWinds Officials Blame an intern for their infamous hack

Trump to claim control of the GOP

Pirate skeletons found from 1717 off of Cape Cod

Microsoft patents AI that lets you talk to the dead